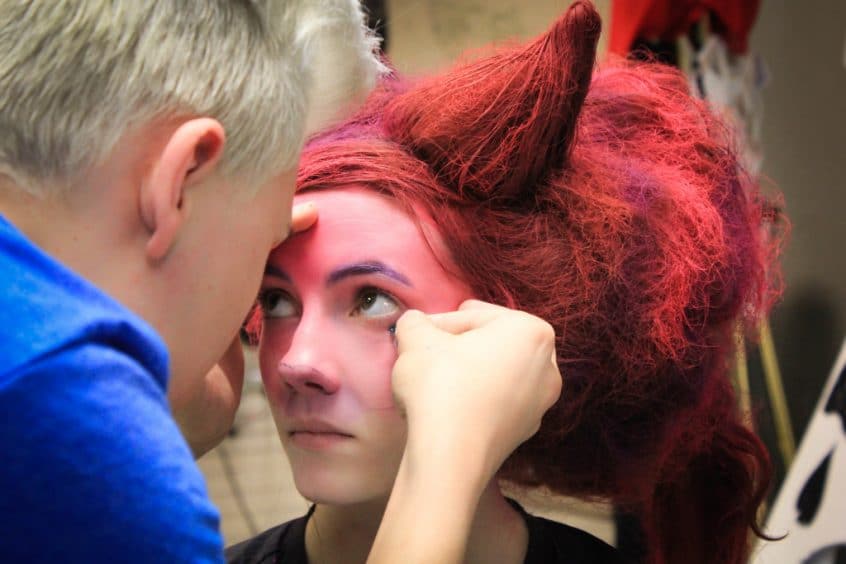 The Academy of Hair Design revealed their 2015 Fashion Show on November 2nd. This year’s event took place in downtown Springfield at the beautiful Veridian Event Center. Guests were served popcorn, soda, and candy. “Night at the Movies” was the theme for this year’s event! We welcomed many professionals from the community to join us as judges for the evening and had a great turn out for the event!

Our students did an amazing job at our Fashion Show! They designed costumes, make up, nails, body art, and theatrics using Disney movies for inspiration. Each team spent weeks designing and perfecting their team’s looks. It was great to see it all come together for a great night of fun, food, and fashion!

Team One used the theme of “Villains & Heroes” for their inspiration. Characters included in their presentation included: Ariel, Ursula, and Flounder (Little Mermaid). Simba and Mufasa (The Lion King), Davey Jones and Captain Jack Sparrow (Pirates of the Carribean), Winifred, Sarah, and Mary (Hocus Pocus).

Team Two used the theme of “Alice & Wonderland” for their inspiration. Characters in their presentation included: Queen of Hearts, White Rabbit, The Mad Hatter, Caterpillar, Cheshire Cat, Cards, A Young & Older Alice, and The White Queen.

Team Three used the theme of “Two is Better than One” for their inspiration. Characters in their presentation included: Princess Leia and Chewbacca (Star Wars), Princess Jasmine and the Genie (Aladdin), Cruella de Vil and Pongo (101 Dalmations), Peter Pan and Tinker Bell (Peter Pan), Pocahontas and Flit (Pocahontas), Snow White and Grumpy (Snow White), Rocket Raccoon and Groot (Guardians of the Galaxy).

The Fashion Show concluded by announcing team category winners. Team 2, “Alice and Wonderland,” was declared this year’s overall winner! We want to give a big thanks to all of our students and educators who worked so hard to bring this together and to our judges who dedicated their time and expertise! It was a wonderful evening!