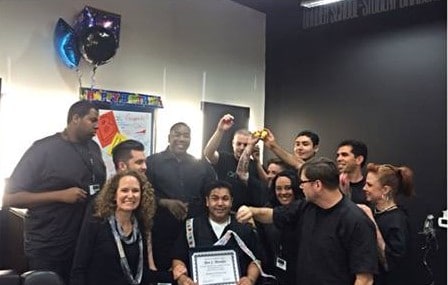 Since we love to share features on our students, we want to introduce you to Ben Morales, a student who just graduated from the Ron King Academy barber crossover program! He said that he originally decided to go to school because he loves making people feel beautiful inside and out and because he wanted to learn how to be an excellent barber. After learning more about Ron King Academy and getting a taste of the culture, he decided it was a perfect fit!

Growing up, his aunt and uncle owned a salon in Corpus Christi and he spent a lot of time there. Ben’s family would always take them food during the day, so he would end up helping them wash towels, sweep, and other small tasks around the salon. After watching them work for many years, he decided he wanted to go to school to get his cosmetology license. April 28, 2015 marked 30 years since he got his license. Way to go, Ben!

Now that he has his barber’s license, he has a lot of dreams about owning his own barbershop. We hope that someday, we’ll get to send our Ron King Academy students to his barbershop to learn from him, and even work with him! When he’s not behind the chair doing his favorite styles, the pompadour and the classic comb-over, you can find Ben at one of his favorite local hangouts in Austin, Broken Spoke.

His words of advice to people who are considering going to Ron King Academy? “Get started! You won’t regret it!” Check out available degree programs and contact us today.