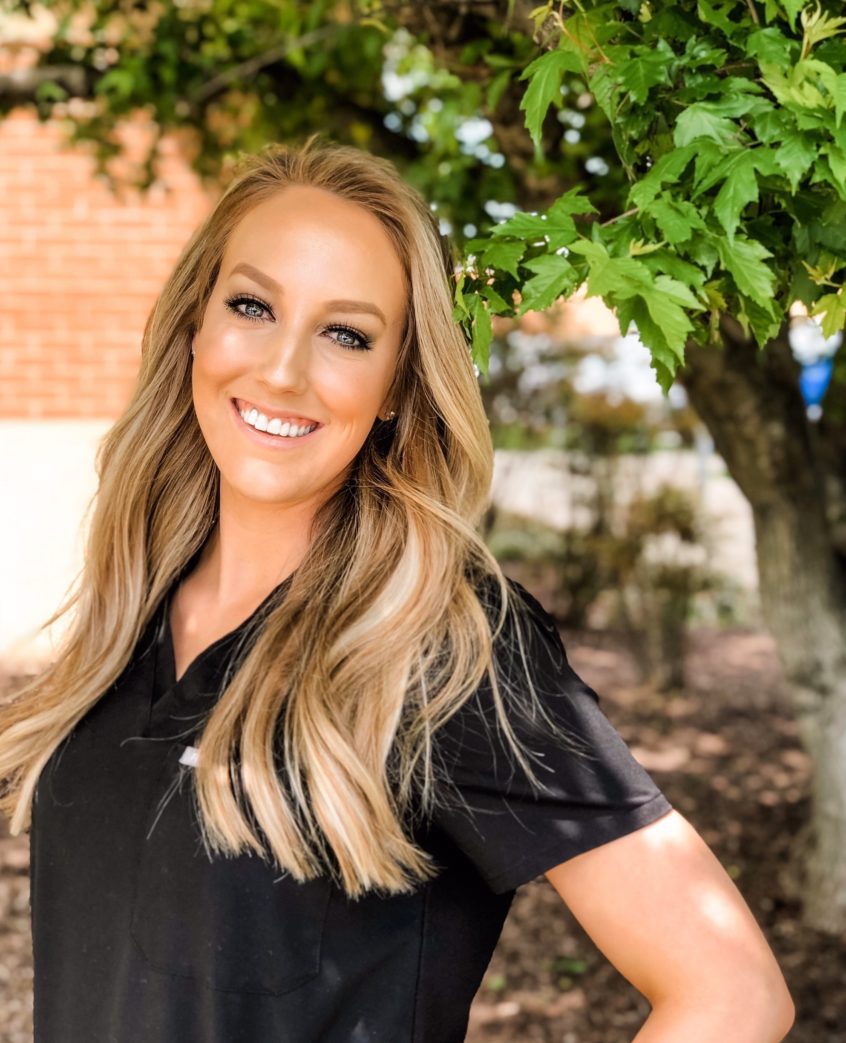 Our next installment of Academy Legends comes to you from alumni Whitney Wade of CoxHealth Med Spa. Whitney graduated from our esthetics program 4 years ago. She’s spent the last two years in the plastic surgery department CoxHealth. Not only does Whitney get to grow as an aesthetician, but she also uses her keen business sense to run the medspa with her coworker, Amanda! The business skills taught by the Academy’s esthetician program have most definitely come in handy.

You might be wondering, “What’s the difference between an esthetician and an aesthetician?” Both are trained to analyze and cleanse skin through a variety of techniques, however, estheticians can be found in spas and salons, while aestheticians typically work in medical settings.

Before she attended AOHD, Whitney’s life was a bit chaotic.

She just completed a significant research project to graduate college. Then, Whitney got married and moved into a new home all within 24 hours! A degree in Sports Medicine and Athletic Training was a perfect complement to her football coach husband. Faced with the prospect of both her and her husband working long, unpredictable hours, Whitney began to search for a career where she had more control over her own hours. Since both were planning on a family in the future, Whitney knew she needed a career where she was in charge. She also knew that she wanted to pursue her passion for aesthetics in a clinical setting. Whitney loved that she could combine her love of medicine with her love of aesthetics to make a career that could comfortably support her family.

Whitney chose the Academy because of the wide variety of scheduling options available. She decided full-time would be the best option so that she could graduate as soon as possible. Whitney did not tour any other schools when deciding where to attend. After her tour, she knew the Academy would be a good fit for her!

Whitney came into our school with a unique background. Already having graduated from a sports medicine program, she had a solid knowledge base when it came to anatomy and physiology. What she lacked, was the hands-on experience and spa services an esthetician usually performs.

If Whitney could go back in time to before she started school, she would remind herself to use every opportunity available to work on her classmates and think outside the box. “Your classmates are the ones you can try new things on and experiment with.”

During her time with Academy, Whitney had a few obstacles to overcome. Her grandfather passed away and Whitney needed time to grieve, but she also didn’t want to put off her graduation. An Academy educator saw Whitney’s pain and took the time to talk with her and provide words of encouragement and empathy. The impact her educator had was incredible. Whitney chose to pick up and continue moving forward in order to graduate on time!

“Don’t let the fear of failure keep you from trying something new. You must fail in order to succeed.” 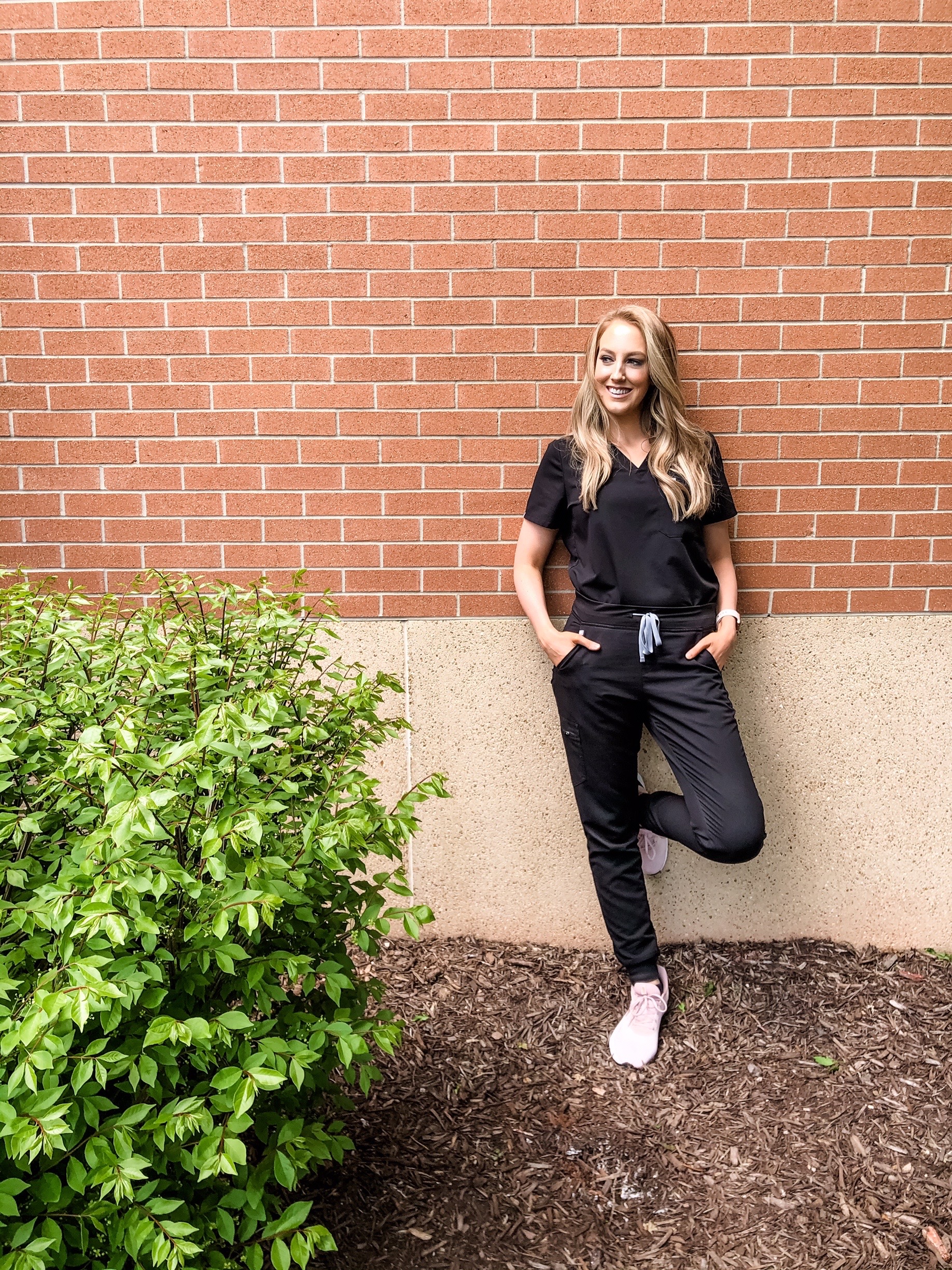 Today, Whitney is making her clients look and feel beautiful while supporting her family. When asked about her “signature service” Whitney detailed her Hydrafacial with dermaplaning and a Casmara mask (ugh we need!) She loves to perform this facial because she gets to see an immediate difference in her client’s glowing skin. She finds this particular service therapeutic to perform because of its relaxing nature. Whitney can easily get lost in the rhythm of the treatment. Any service where she can see a dramatic transformation in her patient’s skin, Whitney loves! Another service Whitney enjoys is a Vbeam Perfecta. You’re probably wondering what on earth that means, and so were we! This is a laser that targets vascular lesions by providing nearly immediate gratification in reducing redness and broken blood vessels on the face.

When Whitney looks to the future, she sees the CoxHealth Med Spa. She loves her career and aspires to grow within her company possibly into business development, education, or an account executive for a medical-grade skincare line. Whitney follows trends and the social media of reputable companies, as well as attending educational seminars. She recently even taught a class to our own esthetics students! We know one thing for sure, Whitney is sure to succeed in anything she puts her mind to!

Are you interested in pursuing a career in medical aesthetics? Thankfully, Whitney’s here to tell us how she was able to enter the field.

“I had a friend that was working as an aesthetician for a local plastic surgeon and their office was looking for a medical secretary. With the advice of an acquaintance also in the industry, I accepted the position to gain experience, get my foot in the door, and decide if this was the right fit for me.” Once in her position, the product and device representatives gave Whitney the extra training she needed. One misconception she wants to disprove is the idea that you need to attend schools like the National Laser Institute or pay for additional certifications in order to work in this field.

Whitney has 4 C’s she uses to describe how someone could find employment into medical aesthetics:

Connections: Who you know is so crucial because this is an industry where there is very little turnover. If you don’t have the connections, make them! Call anyone you want to be a mentor and ask for opportunities to shadow them. This will get you far in the field!

Comprehension: This isn’t a career for everyone. It requires critical thinking, problem-solving, and the ability to understand the skin on a cellular level. With comprehension comes confidence. You must be confident in your knowledge to be successful in medical aesthetics and it must be backed with validity! Patients expect this so I encourage you to study hard and often, always! You’re never done learning!

Commitment: If you want it badly enough, you’ve got to work for it. People who are the best in their field didn’t get there by chance, they worked hard for it! I’m a firm believer that there is always something to do! There should be a healthy level of competition amongst co-workers to constantly push and encourage each other to the next level. Don’t mistake this advice for feeling the need to step on others to get to the top. That may work for a bit, but it will eventually catch up with you and have the opposite effect of your goal.

Character: Professionalism, honesty, and a team mentality are at the top of the list in this category!

Are you an Academy Legends Alumni? Contact bethany@aohd.com to be featured!